We had to get there eventually and we did… Our last episode of the season is here below. But do not fret, we will be back this Spring with a slew of new episodes. Our program has been renewed for a new season . . . In the meantime, the old episodes are going into rerun mode on Sundays. Our new time slot going forward will be Sunday too.

Episode 12: Living On The Edge

In the last episode of the season, host Frederic Colier wants to investigate writers not normally covered or discussed widely in the press, writers living on the edge. As he explains himself, he is constantly interrupted by a guitarist who thinks that the P.I. is a music manager. 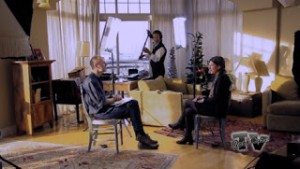 Frederic first interviews Afro-American writer, Sapphire, known for her first novel Push, which later became the indie film hit, Precious. She talks about her latest book, The Kid, as well as her poetry and teaching.
Frederic also sits down with Francophile and queer writer, Edmund White, widely known for writing the biographies of major French literary canons such as Marcel Proust, Jean Genet and Arthur Rimbaud, to discuss his newest novel, Jack Holmes and His Friend. The book explores White’s favorite themes of lust, self-acceptance, and sexuality.

In Pick of the Week, Frederic chooses Punk: An Aesthetics edited by Jon Savage and Johan Kugelberg; Who I Am by Pete Townshend and In The Pleasure Groove by John Taylor.