Click on any of the titles here below and you will be redirected to Frederic Colier‘s entire list of books in print. 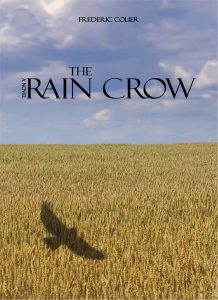 Set in the rural lands of central Michigan, The Rain Crow follows the journey of a young man who is struggling to find a place in a life without a place for him. With a mother now dead and a father emotionally absent, Rudy is left with the family’s crumbling dairy farm. He must choose between his own promising future and what remains of his relationship with his father. As the conflict between Rudy and his father escalates, Rudy unravels the truth about his family, himself, and ultimately, the man he wants to become. Written with stylistic simplicity and poignant immediacy, The Rain Crow captures the barrenness of the American landscape and the people who live it. Colier’s stark prose leads a compassionate investigation into the human heart, exposing the destructive power of delusion while promoting an endless potential for growth and renewal. 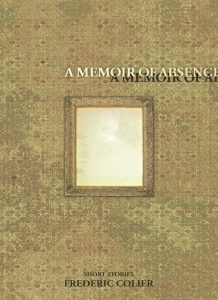 Ever since Salinger, nine seems to be a magic number when it comes to rendering debut short story collections. Frederic Colier’s A Memoir of Absence is no exception. Embarking on an evocative journey through the heartland of our own delusions, Colier’s terse prose guides us beyond the barren cultural plane of our all-too-malleable American dreams taking us into a realm of intellectual urgency, linguistic renewal, and eventual hope. Here – where relativist cant, contemporary platitudes, and even shocking news become no more than the white noise of a fleeting civilization – there is nothing more alarming than the ensuing silence left by those collisions that never get the chance to take place:

In the title story, an estranged father and son are each relegated their own brand of dystopia only to find that it is their respective torments that ineffably bind them to one another. While one pursues impossible love around the globe, the other tries making sense of the void surrounding him. Oddly, it is their parallel misfortunes that find shelter in the harmonious space of absence recalled.

Similarly, Lipstick on the Fishbowl depicts how grief often blinds one from seeing the object of loss. As a bereaved businessman searches for the proper way to express loss for his departed wife, he begins to overlook the significance of her passing. As for those in throes of jealousy misreading even the best of intentions, The Depth of Swimming Pool is a somber portrayal of a woman who – in her state of constant apprehension – ends up undermining that which she most desires.

But whether it is observers dreaming of becoming participants, or the emotionally alienated hordes for whom pain becomes a final solace, the terrain traversed by Colier’s nine stories is neither one that would fill a postcard nor one that sports the trendy wasteland so readily employed by our time’s countdown artists. As the lonely overweight opera singer Josephina considers the abject proposals of a sexless man, or the abused young woman in Cristianos y Moros finally returns home to confront her dismissive parents, we note with relief that Colier’s intention is not to flesh out some vague musings about our era but to attend to those who straddle the crossroads of a world where choosing a direction is no longer a value in itself.

If there is a poignancy to be had, A Memoir of Absence says we’re to find it in those uncertain moments when event is temporarily subsumed by interpretation. This does not mean that observations made by characters are lucid or objective. On the contrary, it is our vulnerability to catch phrases, our compromised visions, and our pathos while estimating our own suffering hearts that bring integrity to our lives. Colier’s short stories are the fragments of a lost anthem – the disparate melodies that once made up what we mystically referred to as, the human spirit. 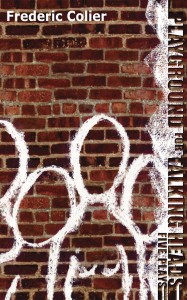 The Playground is the Thing: “Why did you bring me here? To a place like this?” asks the bewildered Kate while trapped in the conceptual hopscotch of Frederic Colier’s relentless imagination. As moral outrage resurfaces in our overtly self-conscious Look-Forward-In-Angst generation, it becomes apparent that our intellectual community is in dire need of a playground – more specifically, Colier’s Playground For Talking Heads. Recently published by Luminous Press, this collection of 5 one-act plays comes complete with a merry-go-round of power games, a playing field of characters and concepts, and a sea-saw teetering between inter-personal conflict and social issues. As an oasis of bold insight amidst a theatrical landscape that is otherwise replete in PC rhetoric, strewn with stylistic devices and littered with oblique references, Playground proves an indispensable resource. It is a fertile world of human transformation, a tersely dramatic cluster of social concerns peopled by fragmented lives. In short, the sensibility of Playground manages to resurrect the dramatic play till it resounds with its original verb-like connotation.