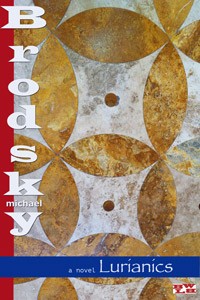 “Lurianics” by Michael Brodsky, tells the story of a youngish man – one Isaac Luria (namesake of one of the world’s great Kabbalists) – who seeks to create a “true work” which will give his life a meaning that is uniquely beyond label. Set on Manhattan’s Upper West Side, the novel anatomizes this unlikely hero’s ambivalence-racked relationships with a veritable cast of thousands, all of whom have one thing in common – a craving to derail his every attempt to get on with the job. They include: a smugly go-getting kid brother, a hyper-articulate mystery woman, and assorted bosses, co-workers, composers and filmmakers living and dead, ballet stars, murdered doormen, stuff-strutting sparrows, and honey locusts about to bloom.

But chaos does not always reign supreme and in the end every encounter plays its part in forcing Luria to confront the ultimate question: Does he have the guts not just to erect his Valhalla (any fool can do that) but to erect it with the only building blocks worth a damn, i.e., the very things befouling the path?