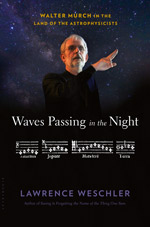 “Waves Passing in the Night,” by Lawrence Weschler

If you wonder what “Apocalypse now, “The Godfather,” and “The English Patient,” have in common, you may scratch your head for a while. Or maybe not. Yes they are all films. Congratulations. But think harder? The first two films would have been an easy guess, but when introducing the third title, the Kubrick-Coppola connection falls apart. The connection is what this engaging little book, half memoir half critical conversation, that Lawrence Weschler wrote with bravado, is about. Its subject? The celebration of the great Walter Murch, the nine-time nominee for the Academy Awards and three-time its winner. Murch was much more than a sound and film editor. Listen careful Lucas’s very first film “THX 1138,” (his most futuristic and thought-provoking by far) and you will understand that at the time of its release, the soundtrack was destined to contribute to its cult masterpiece status. In case you care to know, he also co-wrote the script with Lucas.

Still, the sophistication of sound editing hides Murch’s other passion. He was for much of his life a devout amateur astrophysicist, chronicling long forgotten connection between the Titius-Bode theory and musical harmony in the universe. For a long time, it was believed that each planet of our solar system emitted its own frequencies . . . I would spare you the details, but in this case the law was supposed to have a progression ordered very much like the Fibonacci numbers, and based on planets’ positions and rotations, one could deduce whether cosmic organization was subject to universal mathematical rules. As you can imagine a sound editor advancing long discredited physics theory did not go down too well. But at the heart of this quixotic quest, Murch questions the nature of knowledge. How do we know what we know? And who is to decide what we should know? The questions may seem a bit of a stretch. Not everyone agrees that we should accept universal order in specific examples. But if these sorts of questions are something you are not used to face, you are in for a seductive compelling read.