I cannot imagine dentists liking this book, or even less buying it. In fact it is probably number one on their list of banned books. I would, however, recommend it to them, just to better know their enemies. “Sweet as Sin,” is all about candies. Sweet and sugary. Sticky and addictive. The very stuff your teeth in a long-term relationship dislike but which constantly hits the sweet spot on your taste buds. I do not know of any kid or adult who do not enjoy candies, even surgarless ones.

Benjamin is a candy specialist, and she has written an incredible journey through the evolution of confections. It is not just a history of candies, but also an almanac filled with intoxicating stories of the country, starting with Native American and the little-known son of a slave woman. Like all good candies, the book has a lingering flavor, which will make you ponder about the changing quality of our palate through time. Why for some generations eating barks, roots and bugs were considered treats, whereas now candies have to be coated with layers of sugar before anyone glance at it or even considers sucking on them? At heart, “Sweet as Sin” is an unwrapped story of the evolution of the American society, and of the development of gustatory passions, plus the invention of the concept of lots and lots of sticky fingers. Can you say the US has a sweet tooth?

Since we have not covered a single short-story collection yet, I thought it was time to remedy the problem. “Children of the New World,” which is garnering tons of accolades in the publishing world, is the perfect book to initiate this book review page. This volume is not your customary middle of the road sentimental or experimental story collection. Rather it is a speculative one, in a new genre, often referred to as Human Future fiction. What is at stake here is the becoming of Man, and I mean Man in the broadest possible sense, as in mankind, for the stories reflect on the effect of technology and our interaction with it, notably the increasing blurring between reality and the virtual world. Our children do not seem to have an issue with it, except when you ask them while facing the sun to tell you which way they are facing. The virtual has become even more real than the real. They can answer but only after consulting an App. Granted you could claim that all this transformation is part of the natural evolution, and the people finding problems with it are just the transitional generation, bound to go the way of the dinosaurs sooner rather than later.

Part Magic Realism part sci-fi, the story collection will take you back and forth into a hard-to-breathe utopian-dystopian world of societies gone numb. Here robots have better gut-feelings than humans. Social media lives inside your brain. Video games are integrated into lives. Memories are manufactured, as in “The Cartographer,” where the main character makes virtual memories, while he grapples with someone he once loved, and only a “memory bank” helps him to retrace his past and experience it again. But the most frightening aspect about the stories is not the obvious lost of practical ability in daily life, such as writing, but the widespread disembodiment that comes with relying only on simulated technology. All the protagonists run around steeped in technology to fill out existential voids unaware that the very technology reinforces the sense of disconnection and loss. It is all uneasy and completely creepy, but what a read. 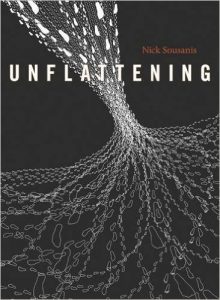 If you are looking for something truly original. Something that will make you think, ponder, scratch your head at thoughts you never had before look no further. “Unflattening” is a graphic novel like no other. Written and illustrated as a PhD dissertation, which looks at the way we learn, “Unflattening” is a meditation on education. How do we know what we know? What are the mechanism that we take for granted to acquire knowledge? No small questions. But a conventional philosophical book would demand absolute concentration and mastery of the idiom to be able to penetrate an arcane conceptual not to mention abstract language. But the merit of Sousanis‘s endeavor relies on the fact that to be drawn a concept must be practical.

Indeed, between the theme and depth of the concept supported by lush captivating drawing, Sousanis is at the helm of an impressive set of skills. Drawing from multiple fields of humanities, Arts, philosophy, literature, mythology, and the sciences “Unflattening” looks at perception from various vantage points and so in order to better disrupt the stability of the image and to guide us towards new hints and allusions, aiming at the heart of our assumptions. At each page, you will find yourself questioning the knowledge of your perception and be delighted by the new unassumed opening doors.

If you think you had it rough in childhood, think again. Once in a while a memoir shows up and has a way to turn your insides out. “An Abbreviated Life” is not for the faint of heart. Ariel Leve portrays perhaps the most pervasive aspect of childhood, hers in this case, growing up with unstable parents, in this case, a parent — her mother, who she describes as “ a poet, an artist, a self-appointed troublemaker and attention seeker.” In other words, a brutal cocktail guaranteeing to lead to shaky foundation and to make the rooms spin.
And instability is what Ariel confronts on a daily roller-coaster of emotional tug of war dance. The most harrowing aspect of her memoir is when she recognizes that her own life, years after her mother’s death, is still been impacted by the relationship. Sound familiar? Who has not, you may say? Leve’s gripping tortured confessions are not sentimental catharsis, aimed at coaxing the reader or even giving them an insight into the horror of an warped childhood. Though the memoir take you to the edge of the unbearable at time when you have to take a deep breath before flicking the next page, it is also an honest investigation of trauma. How to be  knowing that life could have been otherwise but has molded you in a way that entrapped you and this with complete awareness? If your heart does not break at this stage . . . nothing will. This testimony makes a great argument for parenting licensing.

This book will appeal to the fans of Game of Thrones. Here, the story of “Between Two Fires” takes place in 597 when Saxon Barbarians are about to destroy medieval Wales. So what? you may say. Just another fictionalized slice of history.  But the reason the book made it to Author du Jour page lies in the strength of its main character, Lady Branwen. We are miles away from giants with inflated biceps performing miraculous acts. Noce has drawn a fine character.  She is a young woman in a world of fierce warriors, reminding me very much of Boudica when she organized her uprising against the Romans. Branwen is courageous and determined, which always makes for captivating hero. Lady Branwen seeks unity to push back the enemy, but the trajectory get skewed when she falls for a man she cannot have, opening a good emotional dilemma. She sees herself forced to choose between her people, her nation, and the man she loves . . .