March 2017. Only six weeks have elapsed since Trump took power, and what a contrast with the previous administration. The country seems to have been seized by the invisible hand of hysteria and neurosis. In recent memory, never a concentration of angry and vocal citizens has been so strident and quick to gather. In this time of uncertainty, it is always wise to take a deep breath and step to the sideline to better understand what is happening. Are we deluding ourselves with this new administration? Is the threat real? Or are we just venting the seething resentment that has been cementing since the beginning of the Great Recession and, why not, the costly Iraq War? This month’s selection provides reflections on our national and chaotic mental states. 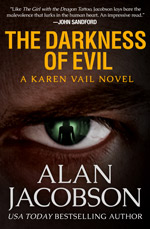 “The Darkness of Evil,” by Alan Jacobson

Sanity can be regained in many ways. While there are those who go to great lengths to analyze a person’s psyche to better penetrate it and spend a great deal of time to suggest curative solutions by trial and error, there are also those who advocate the more expeditive fire-by-fire approach. Divergent psychologies imply different perception and understanding of humankind. This is where Alan Jacobson (a truly underrated author) situates himself. Not that he necessarily believes in the latter approach, but in terms of thriller writing, his willingness to throw his characters into the darkest recesses of the human mind makes his story feel like boarding a hell-train from page one. His new Karen Vail’s novel, “The Darkness of Evil” is beautifully layered for this reason.

Think for a second if you woke one morning and found out your father was a serial killer. What would you do? What would you say? This is what happens to Jasmine Marcks, one of the protagonists. Is it possible to love a father who tortures innocent young women? Can a sadistic killer be a good father? Whose allegiance should a daughter have in mind, the community or her father? No easy answer, no matter who we are. But here the novel addresses the question in an original way. Jasmine, who turned her father in to the police, has written a book about him. But the incarcerated serial-killer father manages to escape and now seeks revenge. Karen Vail must protect Jasmine from her own father. But what is Jasmine now going to do about it? . . . “The Darkness of Evil” is a brisk, surprise-filled twisted ride, which will drain every ounce of darkness out of you and make you feel like a sober angel. 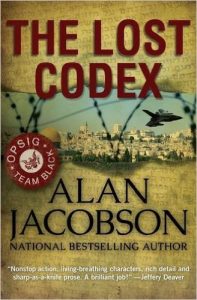