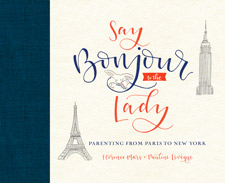 “Say Bonjour to The Lady: Parenting From Paris to New York,” by Florence Mars and Pauline Lévêque

If you lived abroad for an extended period, even simply during a semester off while in college, you know that cultures are nothing alike. There is as much in common between Russian and Portuguese bread than between a whale and a tiger. That is what give the world its colors and texture. There has been a bevy of books about raising children in foreign countries of late.  France and Paris seem to be the target to this topic.  A mother forced to live abroad because her husband’s multi-national has relocated the family to a distant land or simply a single mom in search of new adventures learn quickly that, in France, things are not quite the same as in the States. They readjust with more and less success to the new local flavors.

There’s always an element of silliness and caricature while observing another’s culture. Italians speak with their hands; French shakes their head to show easy irritation, and so on . . . But beyond surface observations, social frameworks speak louder than words. They are harder to pinpoint. The French knock on your door uninvited for dinner. The Spanish don’t start dinner before 11 pm, and the Dutch bring their own food along in case you have not inferred the hint. Yes, they are camping in your place, for a few days.

In their charming illustrated book, “Say Bonjour to the Lady,” Florence Mars and Pauline Lévêque achieve that sweet delicate balance by drawing funny everyday situations between the art of raising children in Paris versus New York, from first-hand experience, without falling into obvious cultural yawns. What becomes apparent with the Lévêque‘s clean-lined illustrations and Mars‘s micro texts is the swinging pendulum between the two cultures applying different approaches to reach nonetheless the same goal. On one hand, French parents seems far less concerned or involved in monitoring their children around the clock, which could be interpreted as a sign of trust. They preferring instead to allow their children’s own self-development to flourish or let them deal with themselves to the point of coming across as not caring. Whereas in New York, parents seems at the service of their children around the clock, to the point of appearing to reveal an underlying anxiety or fear of missing out or stunting or damaging them if they fail to validate any one of their initiatives. Which would be a mistake to believe as well. New York parents simply love to include their children in their lives. Raising them is a hands-on family affair.  The book’s strength stems from the playful comparisons Lévêque and Mars draw. Both sides have wonderful and sad pros and cons. If you can accept that, in France, children play in a separate room located as far as possible from the adults’ center of gravity, the living room, and that, in New York, parents live in their children’s living room, another word for playroom, you are in for a few complicit merry giggles.