This book will appeal to the fans of Game of Thrones. Here, the story of “Between Two Fires” takes place in 597 when Saxon Barbarians are about to destroy medieval Wales. So what? you may say. Just another fictionalized slice of history.  But the reason the book made it to Author du Jour page lies in the strength of its main character, Lady Branwen. We are miles away from giants with inflated biceps performing miraculous acts. Noce has drawn a fine character.  She is a young woman in a world of fierce warriors, reminding me very much of Boudica when she organized her uprising against the Romans. Branwen is courageous and determined, which always makes for captivating hero. Lady Branwen seeks unity to push back the enemy, but the trajectory get skewed when she falls for a man she cannot have, opening a good emotional dilemma. She sees herself forced to choose between her people, her nation, and the man she loves . . .

You may not remember who C. R. Hyde is, but suffices to tell you that she is the author of “Pay it Forward,” which was adapted later into a film with Kevin Spacey, for you to say “of course.” This new story takes place in the Blythe River National Wilderness, which I discovered is located in California.

There, a young teenager, Ethan, goes looking for his missing father, after he disappeared from his cabin, and rangers decided to abandon their rescue mission to find him.  Totally unprepared, Ethan ventures nonetheless into the wilderness and quickly learn the roughness of nature: the punishing sun, the swirling rapids, and the strength and resilience derived from pushing oneself past one’s limits . . . but the story is not an exploration of one’s courage in the face of adversity, but rather a true confrontation regarding forgiveness, as Ethan must decide whether or not his father is worth to be saved at all. From from being a walk in the park, “Leaving Blythe River” meanders with splendor through nature’s brutality.

Set in the New Mexico, “Land of Enchantment,” is a riveting coming-of-age memoir about young love and its impact. The story opens with the author receiving a phone call from her brother to tell that her ex-boyfriend, Jason, has been killed in road accident. Jason’s death causes our protagonist to recall the difficult life they shared together and forces her to contemplate tough questions while grieving. How is it possible to fall in love with someone who causes so much pain? Why is it so hard to walk away from this type of love? How can love be so destructive? The engaging memoir traces the psychological evolution of an abusive relationship, while raising larger issues. Why are the women who step forward so often shamed and bullied?

“The first time they did it” is about first timers. Regardless how old they are and where they come from, how and when they did it is a topic they do not shy away from. As a matter of fact, they are quite loquacious discussing the topic, exposing their weaknesses and frustration and the moment of bliss round the corner waiting to greet them. But before “graduating,” they shared similar painstaking journeys of perseverance and painstaking apprenticeship. 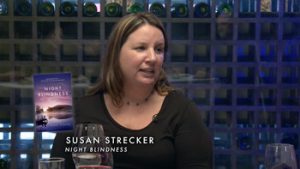 Susan Strecker, “Night Blindness” offers a rare exploration of the singular, unparalleled love between a daughter and her cancer-riddled father, and writes with unflinching honesty about the dynamics of a family in crisis, and the fallout of a single rash act: how responsible was she in the death of her brother? 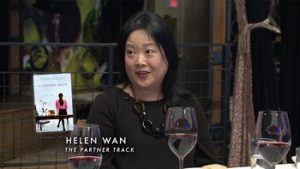 Helen Wan, “The Partner Track” took the world by storm with its new take on the office politics/law firm novel that follows a Golden Girl employee who has passed the apprentice stage and is now facing mature and relatable issues. But textbook and reality are two worlds apart, and soon our Chinese American prodigy has to wade across the deep waters of damage control as she herself drowned in a her own romantic life. 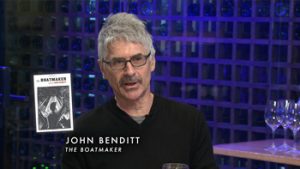 John Benditt, “The Boatmaker” tells the tale of a fierce complicated silent man who wakes from a fever dream compelled to build a boat and sail away from the small island where he was born. The boat carries him to a bigger island, where he becomes locked in a drunken and violent affair whose explosion propels him to the mainland. Hence begins a long journey of discovery, part fable and part allegory.

If there is enough food for three, chances are there is enough for four. We are what we eat. But what about if you don’t like the diet you eat? What would you become? We gather at a table every week, and yet we still have not had a panel about health and food. This week, we are discussing about health, physical and emotional, and how good and bad food impacts our general well-being. 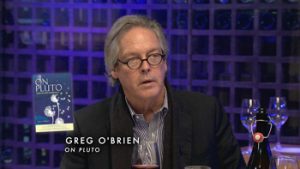 Greg O’Brien, “On Pluto” is a first person account with Alzheimer. O’Brien speaks freely about what it is like to lose your mind and “see slices of your very identity being shaved off” on a daily basis. The story is a beacon of hope to anyone who can read and listen. 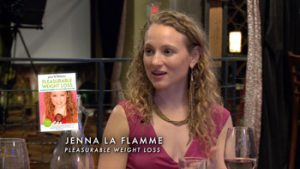 Jena La Flamme, “Pleasurable Weight Loss.” For Jena “the key to losing weight is not about enjoying less, it’s about enjoying more.” This radical insight has allowed thousands of her students to lose weight without food plans, arduous rules, or punishing exercises. Pleasure is the secret to switching off the stress triggers. 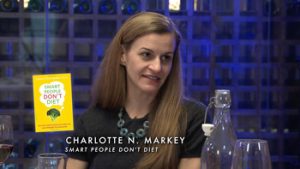 Charlotte N. Markey, in “Smart People Don’t Diet: How Psychology, Common Sense, and the Latest Science Can Help You Lose Weight Permanently,” Markey uses psychology and brain chemistry and more than 100 years of research and scientific findings to provide an accessible approach to weight loss that yields sustainable, long-term results.