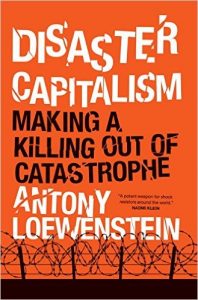 In this age of global conflicts, there is never a shortage for milking out tragedies. Whether he is dealing with immigrants stuck at borders or immigration centers, destructive mining practices or questionable NGOs in Papua New Guinea where locals have not recourse but to rebel, award-winning journalist Antony Loewenstein gives a first account, from the front line, of the rise of Disaster Capitalism. If you want to learn how companies such as G4S, Serco and Halliburton derive a large part of their profits, this book is for you.

From the publisher: “Award-winning journalist Antony Loewenstein travels across the US, Britain, Afghanistan, Pakistan, Haiti, Papua New Guinea and Australia to witness the reality of Disaster Capitalism—the hidden world of privatized detention centers and militarized private security, formed to protect corporations as they profit from war zones. He visits Britain’s immigration detention centers, tours the prison system in the United States, and digs into the underbelly of the companies making a fortune from them. Loewenstein reveals the dark history of how large multinational corporations have become more powerful than governments, supported by media and political elites.”