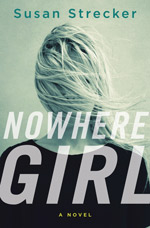 A sophomore book for Susan Strecker after her elegiac and biographical debut novel “Night Blindness,” which appeared on a TV episode of Books du Jour last season. In “Nowhere Girl,” Susan has lost none of her engaging style, although this time, her voice takes on a fantasy tone, which at times makes this moving novel swing between a thriller and a woman-in-jeopardy story. But because the story focuses on the main protagonist’s rumination (not too much cop, not too much ghost) it remains a novel, albeit a suspense-ridden one.

Cady Martino, the main protagonist, has a twin sister, Savannah, a popular girl who, one night, is found murdered. The police at once classified the murder as a “random attack of opportunity.” However, Cady never stops hearing from her sister. Savannah keeps sending her messages that make no sense. Years later, Cady, now a bestselling author of suspense, makes a chance encounter, which gives her the missing piece of the puzzle of all the messages. But in order to solve her sister’s murder, Cady must now cross a maze of betrayals and deceptions dating back to their youth.